Tania has an interdisciplinary background; she is a water management specialist and social sciences researcher. She recently joined the LAMC at UBL as an associate researcher collaborating with Dr. Olivia Agne in 'SeedValues.' She works as an Indigenous Peoples' Food Systems and Water Expert at the Food and Agricultural Organisation of the United Nations. Tania has worked in international development for more than ten years. Her current research interests include politics of knowledge and research in technology-driven interventions, gender and social inclusion/exclusion, climate action, nutrition, and Indigenous Peoples' Food Systems.

Tania holds a B.Sc. in Irrigation Engineering from Universidad Autónoma Chapingo in Mexico, an MSc. in Agricultural and Biosystems Engineering from the University of Arizona in the US, and a Ph.D. in social sciences from Wageningen University in the Netherlands.

She worked in sanitary engineering, wastewater treatment, water reuse in agriculture, and irrigation technology transfer in Mexico in the early years. From 2011-2012 she worked as an irrigation specialist at the University of Arizona in the United States. She studied the effect of water stress on sweet sorghum for bioethanol production as an alternative to fossil energies.

In 2012, she joined the International Maize and Wheat Improvement Centre in Mexico (CIMMYT) as a research assistant for the Sustainable Modernisation of the Traditional Agricultural Programme (MasAgro). During 2014-2017, Tania was a joint Ph.D. candidate at CIMMYT-Wageningen University (WUR) and, from 2018-2019, a full-time Ph.D. researcher at WUR. As a Ph.D. researcher, she contributed to different learning processes of the MasAgro project. Her Ph.D. research aimed to understand why some technologies and pathways are promoted in mainstream research and interventions while others are disregarded and the implication for social inclusion/exclusion. She used the MasAgro Programme as her case study and focussed on three technologies, i.e., Conservation Agriculture, Native Maize, and ICT4D.

From 2019 to 2020, she was a community specialist of the Global Landscapes Forum, Centre for International Forestry Research, where she ran the assessment phase and started the pilot of the GLFx project aiming to mobilise and connect different groups on climate action around the world.

From 2020 to 2021, she worked as a postdoctoral researcher in Public Health, Anthropology, and Development Studies at the Natural Resources Institute, University of Greenwich. During her postdoc, she collaborated in the project "Intercultural models to improve nutrition and health of indigenous populations through gender-sensitive agroforestry practices in Peru."

As an Ëyuujk Indigenous woman from Mexico and researcher, she actively collaborates with organisations to advocate for the role of indigenous knowledge as key to the biocultural diversity of indigenous peoples and tackle global challenges. She has spoken about these issues at high-level events such as the United Nations Food Systems Pre-Summit 2021. She is also a member of the Global Hub on Indigenous Peoples' Food Systems and the Indigenous Partnership for Agrobiodiversity and Food Sovereignty advisory board.

She continues to be engaged with her community, Tamazulapam Mixe, and during 2020, she fulfilled a year of community service as the Secretary of the Women's Office in her hometown of Tamazulapam del Espiritu Santo. On January 1, 2020, Tania accepted her 'Baston de Mando' (a symbolic wooden cane used to confer authority in some indigenous communities) and, therefore, the appointment to support the Women's Office in issues related to welfare of women in her community.

Tania also does advocacy work for the right to education of minority groups and women in STEM. In 2016, because of her academic trajectory and social commitment, she was awarded the National Youth Prize by the Mexican Government. 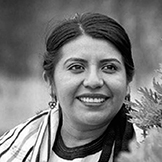